“If an accident happens money will not be refunded.” Warning from friends and travel websites came back to my mind when I read this message written on my matatu ticket. “Matatus are not safe,” I could hear them repeat in my mind. “They are cheap for sure but accidents are frequent.”

My stubbornness to always travel as local people do and the incredibly cheap price of the ticket still had convinced me to take a seat inside the small mini-bus parked in Nairobi station and heading to Nanyuki. 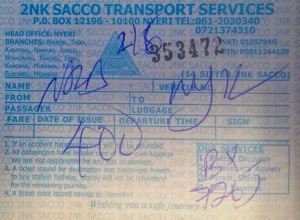 One thing to know if you ever decide to travel by matatu is that you’ll need a certain dose of patience. As I sat in the vehicle still half-empty, I quickly learned that the rule number one was: as long as there are seats empty the matatu won’t go anywhere. After a little more than an hour, the mini-bus was finally full and ready to go. Accompanied by the sound of chicken chirping at the back, we finally left Nairobi.

From all the rumours and stories I had heard about matatus‘ drivers, I have to say that my ride went swiftly despite some bumpy roads. I even managed to fall asleep for a while and woke up looking everywhere around me hoping to catch the sight of a giraffe or any other Kenyan emblematic species. After few hours we reached our terminus: Nanyuki. My final destination, however, was still awaiting for me further away.

Ol Pejeta Conservancy had arranged a taxi for me and after twenty minutes (and the realisation that I had assumed incorrectly that there was only one matatu station in town) my driver, Martin, picked me up.

My eyes widened once we passed the entrance gate of the conservancy few minutes later. I could see antilopes all around and elephants in the background.

“What’s your favourite animal here?”he asked me. After a quick thinking, I answered him: “I love hyenas.” Martin just couldn’t stop laughing at my answer. He explained that people in Kenya usually did not like hyena very much. When asked about his own favourite he told me that he really liked giraffes. “They are tall and elegant. They can eat the leaves that no other animals are able to get.” 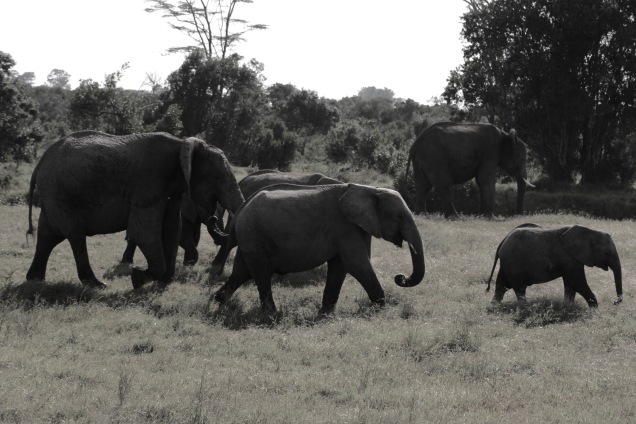 Once arrived at the Stables, formerly known as the Research Centre, I was warmly welcomed by the staff and shown the room I will occupy for the next two weeks.

I quickly realised that traveling around the conservancy during my free time (I was there as an intern) wouldn’t be as easy as I thought. I had no intention to be eaten by a lion or charged by an elephant while walking around so my freedom of movement seemed suddenly quite limited.

Over the weekend, however, I noticed the frenetic obsession that people at the camp seemed to have with rhinos. When asking around what exactly everyone was so excited about, I was made aware that a process called rhino notching had been going on for a while and was coming to an end on Sunday.

The notching involved two teams: one team in an helicopter shooting the rhinos to be marked with tranquilliser and a second one composed of various trucks on the ground tracking the rhinos, ready to act once the animals were asleep. Quite exciting indeed!

On the Sunday afternoon, I got lucky enough and was able to join one of the ground team. Packed with various staff members, the truck quickly headed toward an open plain where we watched the helicopter chasing a rhino. Leaning dangerously, the airplane managed to get close enough to the impressive animal allowing the vet to tranquillise it.

Seeing the rhino slowing down and finally falling asleep was the signal that the ground team had been waiting for to get into action. Speeding through the bush following GPS indications, I could feel the tension and excitement building up among us. Everyone knew that the animal would not stay asleep for very long  so getting to the scene quickly was essential to the operation.

Once the rhino had been located, the wildlife team rapidly went on the ground and started buzzing with activity. While some measured the individual, others painted a white sign on his back, took some blood sample and finally pierced his horn to insert a GPS tracker inside. The process is completely harmless to the animal and the horn made of keratin will then grow back around the tracker.

The pressure faced by rhinos in East and South Africa from poachers make it essential to be able to track the animals inside the conservancy. However, the data collected also allow to gather information on the health, genetics, and distribution of the individuals present in Ol Pejeta.

Five minutes later everyone has managed to do what they were supposed to do and the staff members quickly go back to the trucks. Slowly, the rhino starts moving again. Looking confused and dazed, the massive animal looks around him and gets up. Now firm on his legs, he quickly disappears in the bush: time to track the next individual on the to-notch list.

The rest of the afternoon was a succession of wild rides in the bush followed by frenetic activity for every asleep rhino that had to be marked. The sun was starting to drift when we reached the last individual to be notched. As for the others, the staff members quickly jump down the truck to start buzzing around.

They were almost reaching the animal when suddenly the rhino started to move and got up. A wind of panic blew across the team and everyone quickly ran back toward the truck. The rhino made few steps and fell asleep again on the ground, breathing heavily. That’s one this last adrenaline rush that a truly amazing afternoon reached an end.

The ride home gave us the opportunity to watch the sun slowly making its exit through a beautiful spectrum of reds and oranges. While the day was coming to an end for us, the bush was still vibrating with life. I kept looking at the zebras and antelopes around us, trying to print in my mind as many details and memories as I could.

One thought on “Meeting with rhinos at Ol Pejeta Conservancy”